During the exhibition periods up to April 2018, ArticulateUpstairs's mezzanine space  will be part of the projects that are also in the downstairs project space: Suzanne Bartos' Be Very Afraid, Articulate's birthday project, Articulate Turns Seven, Tolmie MacRae's Transimmanence,Articulate's progressive FERRET, the National Art School's PROXIMITY and WeiZen Ho's The Subtle Beings.

During the exhibition periods up to April 2018, ArticulateUpstairs's mezzanine space will be part of the projects that are also in the downstairs project space: Suzanne Bartos' Be Very Afraid, Articulate's birthday project, Articulate Turns Seven, Tolmie MacRae's Transimmanence,Articulate's progressive FERRET, the National Art School's PROXIMITY and WeiZen Ho's The Subtle Beings.

The exhibition Hidden reveals secrets, both the familiar and unfamiliar; the return of the half remembered into the present. It negotiates with the ambiguity of perception and presents experience as haunted, curious and ironic. Kirsten Drewes and Elizabeth Rankin present works which explore disturbing worlds. Kirsten’s soft sculptures describe abject bodily forms with humour. Elizabeth’s darkly romantic paintings, drawings and animations narrate stories of Australian noir. This is an integrated exhibition. It engages the space by hanging small and large drawings in space as collage and projecting animations onto a surface. There are soft sculptures crouching on the floor and suspended from the ceiling. The intention is for a dialogue between the works of each artist within the space that will extend the perceptions of the viewer. This collaboration between the artists enriches the experience of the exhibition as one of varied visual forms that create new conversations about the vulnerability of being human. 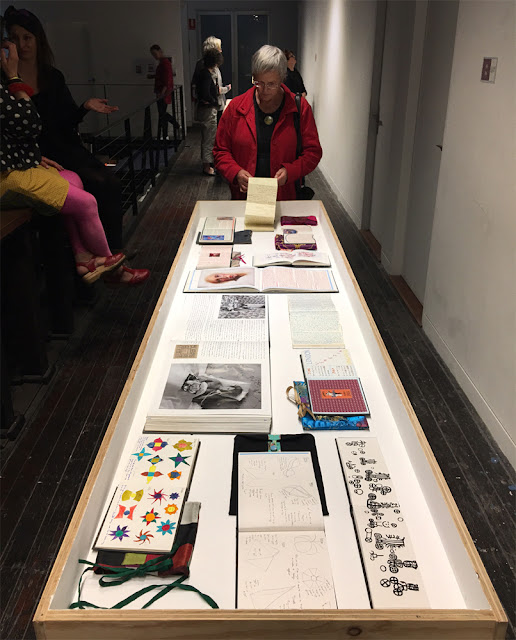 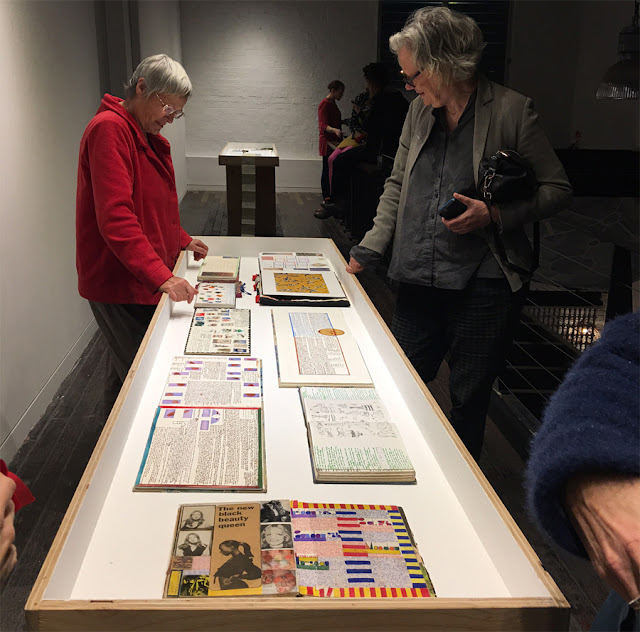 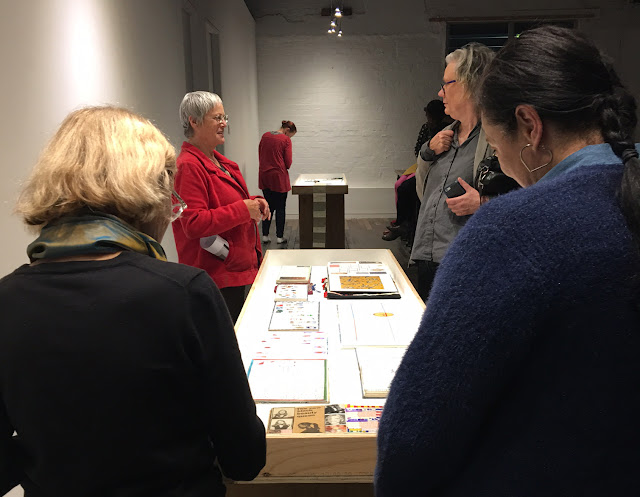 Late in 2014, a notebook was returned to me out of the past – my first notebook, begun in 1969 in senior high school. As an artist, I have always used a notebook to organize, think, remember, and the return of this genesis of the books made me view them differently, objectively. I remembered the reason for the first notebook’s creation. We were required as senior students to keep separate files for each subject and I found breaking experience up into isolated chunks to be counterproductive. So I began the notebooks and started mixing study, life and ideas all together as they occurred. The visual/design aspect of each page helped thought and memory.

After a hiatus, I returned to the use of notebooks when I began study at art school and have maintained one ever since. The books contain everything – ideas, sketches, shopping lists, money (lack of usually). They have become a part of my brain, and a way to assess each day how steady my hand and mind are.

These notebooks are not part of my art production, but as a collection they have become (one visual identity/an object in itself), one that I very much wanted to see together. Nearly 50 years of creative life, with a few gaps, are represented here.

Logically this leads me to think of the end of the series. I would want to destroy them rather than leaving them behind after my death to be dealt with by my relatives, but to choose the time of their completion is akin to choosing the time of my own death.

As only one double page of each book will be displayed at any one time, the pages will be turned each week so that 3 different viewings are possible.