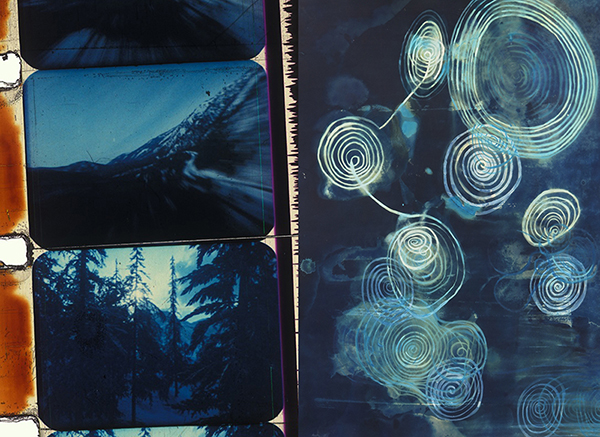 Sue Pedley and Virginia Hilyard frequently collaborate but this exhibition takes us back to their individual practices. More importantly it explores the beginnings of the technical image itself, in the threshold space of its emergence. In this work, both artists explore what we could call ‘the analogue digital’ in a direct use of digits (fingers) in this thoroughly hands-on media archeology.

Pedley’s ‘Blueprint’ evokes not only a history of the photographic image, but also a history of technical drawing, in the projective sketches of architects’ and surveyors’ plan-making. The blue intensity of the cyanotype has its origins in the long development of colour and in this case, the 1704 appearance of Prussian Blue – the first modern synthetically-produced colour, arriving as an accident of experiment. Wait a few years and along comes photography and the cyanotype, developed in Sir John Herschel’s chemical experiments and appearing for the first time in 1842 in Anna Atkins’ photograms. The molecular structures, aerial topographies and patterns seen under a microscope that are suggested in this series of Pedley’s cyanotypes directly reference this history, adding to it, painting lines on the surface. The images in their fugitive quality evoke the ephemeral image, suggestive of another Herschel ‘siderotype’: the ‘breath print’, a mixture of ferro-tartaric acid and silver nitrate. After exposure, no image appeared until someone came along and breathed on the print and the moisture of breath oxidized the iron, activating the latent image.

Virginia Hilyard returns us to the materiality of cinema and precisely to the logic of montage: to the splice, that very intersection of frames combining one scene and another and the process of holding them together. By focusing on and enlarging this moment, the material base of the image appears in its luminous translucency as abstract composition. It is only in the stillness of these images of time frozen that an otherwise invisible picture is able to appear in the diversity of random components and contents. This abstraction of the cinematic image at the degree-zero point of movement brings us face to face with the underlying chemical nature of filmic processes, less visible now in the even more abstract nanoscopic structures of digital image-making. What Hilyard’s images capture in its essence is the pure potential of movement, that moment when the image is animated in the juxtaposition of frames moving. It is a metaphor too of the beginning of life itself in the recombinant form of cells sharing parts of each other to form a new organism. This is foregrounded in the title, Picture Start, words that appear on film leader in their insistent modernist command.

Both bodies of work are located at the ‘picture start’ point, when the image itself comes into existence. Both bodies of work have a regenerative/recombinant quality, re-using materials to produce new life forms, or in this case, we might perhaps say, movement-images. 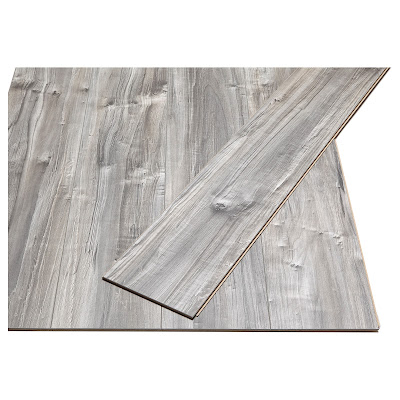 REAL FAKE charts the uncertain terrain between surface and substance: between material and the representation of material. The works shown use vernacular substances – vinyl, laminated flooring and prefabricated steel which emphasis surface – aspirational, shiny, new. Wood and stone are doubled, domesticated and performed on the surface of composite materials.

Playing with modes of display, wall and floor works will speculate – re-modeling familiar surfaces, platforms and spaces. But rather than the asserting the confidence of belonging, these materials will be nervous, awkward and slightly embarrassed – fugitives from the display home