Artist's talk: Sunday 12 May 3-5pm (in conjunction with artists from Place and Image)

Flow is something alien to the human movement. Due to its skeletal structure, the mechanics of the human body does not allow flow in its motion, its nature being contraction, extension, and rotation. Flowing movement mostly is either a poetic metaphor or a highly controlled, culturally conditioned imitation as in rituals, dance, or some sports like gymnastics or martial displays, which often would be associated with performing arts.

The bloodstream, neurotransmission waves, or breathed air constantly run through us, but we have a very limited or no direct access to or control of them. The awareness of those aspects of our physicality comes from the practices distanced from human subjectivity: science on one hand, and on the other, endeavours of controlled following, oriental concentration systems like yoga, taijiquan, or meditation, as well as certain dance regimens like Bodyweather.

However, in an attempt to take control out of equation, I have been trying to move beyond the point of observation, introspection, or performance. One thing that perhaps is given to us seemingly with no mediation is the perceptual inflow. Among the still imagery, the landscape form offers itself as a flow, since apart from its representational and structural aspects, it can be deliberately shaped to present an unobstructed movement of the eyes glancing across it.

The photos of the moonrivers series came about through reliquishing control over the picture, subject, or movement. My main interest was in the spacial and temporal presense of human body, however any specific state of mind evoked
during the production was not to inform the content of the images, but to maintain the state of no control over them. The photographic sessions and postprocessing were based on two minimal mechanical protocols.

The moonrivers series builds upon the same visual material as in the work previously done in collaboration with a choreographer and dancer Tess de Quincey, which was based on introspective Bodyweather techniques. Those images acted as records of short orbits or syllables circumscribed by the human body in its interaction with the place and light. The moonrivers try to go beyond the content of those early records towards the investigation of forms of flow to which we are exposed.

The moonrivers connect body, which is a part of me and yet out of my control and does not correspond to anything in my mind even subconsciously, to the flow of landscape or a map through the mediation of light of the full moon and
working out a routine of trivial motions. My movement protocols evolved from various motion patterns including Bodyweather exercises. Gradually, I reduced my intentional body dynamics to the bare minimum of control and
introspection.

In the same way as the actual corporeal flows barely make any immediate sense to us, I tried to reduce the internal content of the images to zero. Instead of construction, the moonrivers series is based on selection external to it. Any other seeming connotations are external, too (and therefore language-related in Saussurean sense): flow, rivers, rivers on the moon, the moonrivers, an accidental link to Mancini's song, the Moon as a dead waterless celestial body, nostalgic absence, including nostalgic absence of oneself.

In the West, at least since Plato's time, ego and self-perception have been connected to the Platonic light that illuminates the things as they are, emanating either from God or from Nature, mostly imperceptible or impossible to look at, but making everything else visible to the human. The ability to see things illuminated by the light defines the classical notion of ego. The higher availability of light-producing devices and mirrors in the late Middle Ages enhanced the ability of seeing that contributed to the emerging classical ways of thinking.

The classical ways of thinking put ego in the centre as the observer in the position of power. That's what I learned once, though: in the mid-19th century, a round watchtower was put in the middle of Darlinghurst Gaol in Sydney as a
panopticon, a point of perfect and total surveilance, but they quickly found that its position was extremely vulnerable and the building was converted into a chapel, preserving it as a symbolic centre, since the material one was
indefensible. This makes me wonder whether the Western ego is besieged by its nature.

The modernity is gluttony of light. Once the needs of knowledge, production, and surveillance are satiated, the light retreats: it is there not to dispel darkness and open to the sight, but to be seen in the night as a signal or source of
amusement, attraction or diversion. It is not a new role: lighthouses and other maritime lights have been utilized for mapping and navigation. They do not feed one's ego by exposing and presenting to him objects and pictures. Instead,
they allow someone whose soul is dissolved in indeterminacy of night to make his way.

Taking photos of the series, I was pointing my camera at the lights installed for entertainment. They were not meant to illuminate. Due to the set up, I could afford only very small motions, which required minimum of control and maximum of concentration on the light to avoid any tension. On such a small scale, my motions hardly could be purposeful gestures, but rather variations in breathing, squeezing the flesh of my palms, or slight rebalancing of my feet - a sort of navigation through my body attracted to the light.

rivers of tomorrow that don’t flow yet

rivers of tomorrow that don’t flow yet is a series of photostencils. I was quickly putting together small make-shift models outdoor. Although I had some degree of control over the construction, the less I exercised it the more interesting
the result were. Each of the installations lasted just for a minute or so. Sun, heat, and wind introduced variations into the set and made modelling and taking photos difficult at times. There was a mechanical rule-based post-processing done on the original images.

These bits of paper architecture could pass or block the light and cast shadows, creating in the image fractured placeholders, absent structures that could accept, or store, or pass through like urban voids, or dry riverbeds, or places
for new rivers to enter and stay. These empty passages and broken cross sections might become conduits of streams in future or remain barren and, if the latter, then how does time relate to them without becoming suspended and partial?

The skeleton of the city or a terrain is nothing like the skeleton of an animal. Through the way it is formed and persists, it eventually is there to stay and pass through - to make flows possible. Is it similar to the light enabling seeing? Or it is about possibilities through constraints? Does it also make time possible? Perhaps not the physical time, but the conditions under which time could be perceived at all, meaning that the stasis of the place exchanges with the structures of the flows (and of time), as opposed to the changes caused by them.

When I worked with the models and photostencils of the series, the systems of geometrical openings that emerged were not anthropomorhic in form or content and neigther were they purpose-built with an objective as "grub"/"sustenance".
Rather, those forms allowed me to inhabit their configurations, aligning myself with their tensions and relationships, memories that my body would keep without my knowing it. 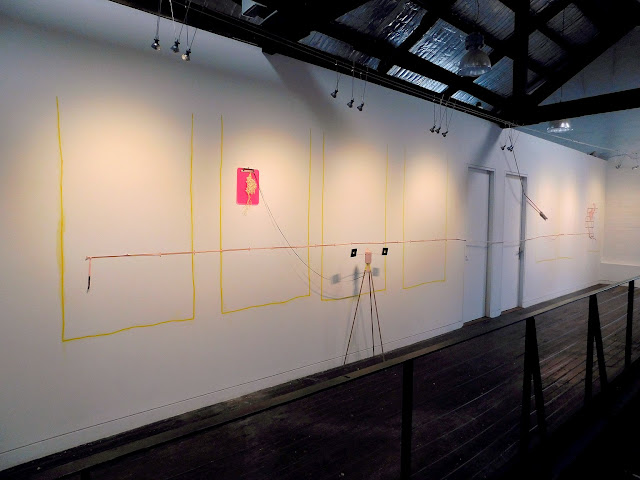 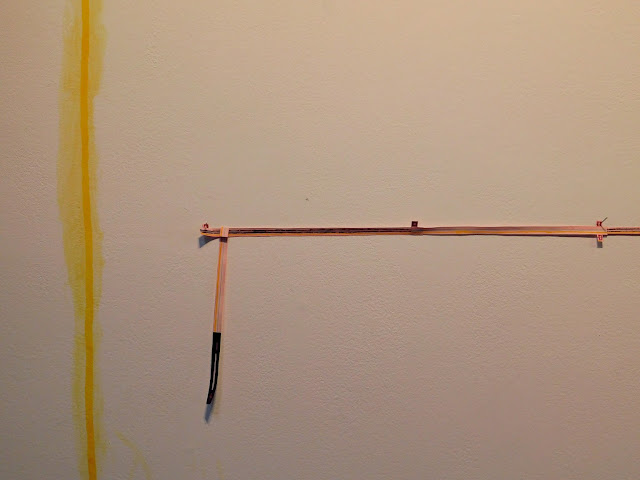 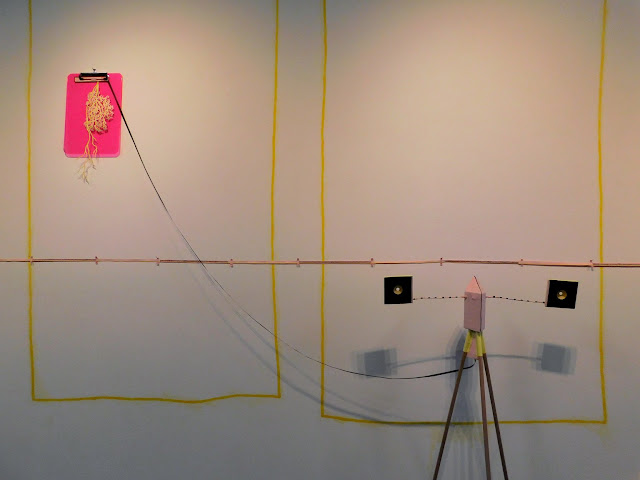 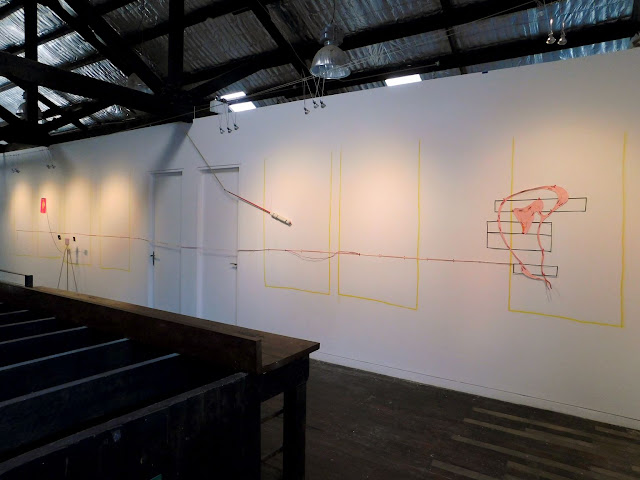 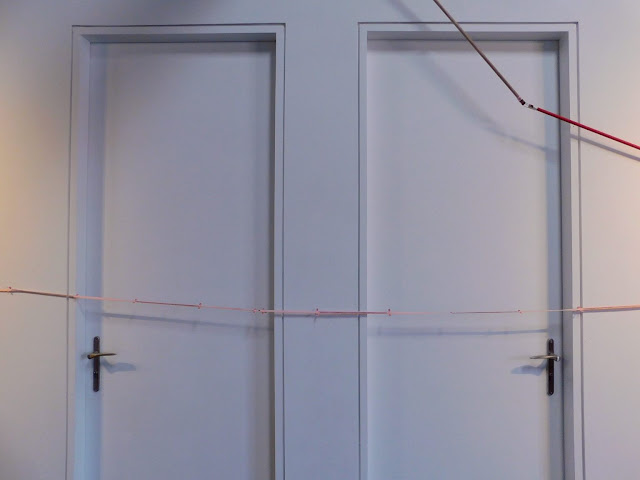 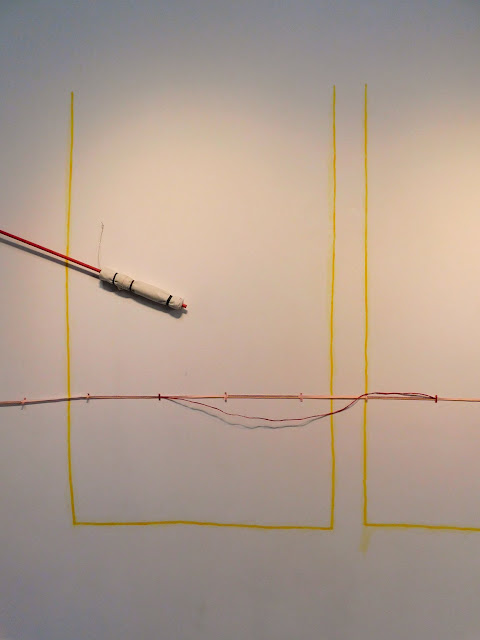 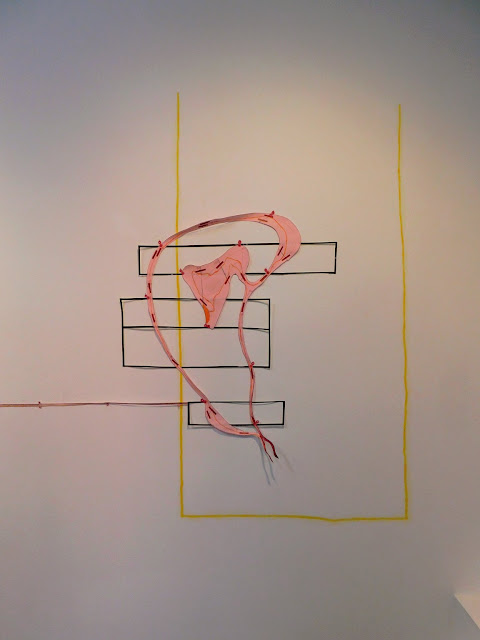