BOAT continues  a conversation between three Sydney artists  about our intrigue with things maritime, being afloat and the perspectives that the mobility and buoyancy of boating can  bring to being ashore. We met on the Owen John,  the cray fishing boat that Jan Taylor motored up the east coast  from Tasmania to Sydney so she could live on the bays of  Middle Harbour and Pittwater. Water colour and drawing are  her medium, images of boats her message, metaphors for her peripatetic lifestyle.  Anna Ingham has  now taken up the anchor and lives between the Owen John and the Blue Mountains.  Boat tackle in all its forms and the charismatic movement of light on water inspire Anna's sculpture and photography. Not a boat dweller, Toni Warburton takes a row boat or a  kayak  along shorelines to observe the  habitats of  molluscs,  oysters, limpets, tidally adaptive life forms  that she conjures  into ceramic cups for the not quite every day.

Living on a timber boat draws a sculptural element into the everyday. There is a sense of being held as in two cupped hands in a separate, simpler but more infinite sphere. Even the words that surround are beautiful - aft -gunwale- cleat - bow. My work is an exploration of this.

Most of my childhood Christmas holidays were spent staying onboard Dad's boat. Sailing around Sydney harbour and Pittwater left me with a distant urge to live on a boat. Four decades later I couldn't resist buying a well loved 64 year old Tasmanian Cray fishing boat. A whole level of complexity was opened up from an elementary knowledge of diesel driven boats. The preoccupation of managing life onboard became a freedom that was a discipline, and a discipline that became a freedom.

A row boat glides where  littoral life, tides, sand, rocks merge in shoreline shallows. One thing leads to another: a reef of varied hanging cups to sway in a friend's galley kitchen.

join us for BOAT anecdotes at ARTICULATEUPSTAIRS  on Sunday 23rd July  at 3 pm to hear the artists share some stories about being afloat, possibly  tell your own, discuss work in the show... a couple of tales are posted below:

Fast forward, take it away boys. Or signal fires, the beginning of true modernity. Kant alone with his evening books. Now he changes channel as prone to the soap as anyone else. Categorize that dear friend. Regensburg in winter is a dear and friendly place but not in the league of, not. Not in the league of Kaliningrad where the gravel pits are. The port is dearer than springtime. Air-cushion ships resume production. Sources of nitrogen please note. Charlie Parker plays a keynote address.

How we got there no idea. Tin Can Bay. Where my grandmother’s ketch, Tassie-made but no forbidden apples. How young I was then. Very. Her true love was washed overboard. That settled things, like a concrete wall of meaning. Off Fraser Island, they said, in a cyclone, they said. The Norwegian sea captain swept away and true love fixed forever, tighter, more implacable, than a ball and chain. The ‘Crescent’, my brother has the watercolour. ‘Because he’s in the navy’ – or was. I got the sad papers of this dire love, in a school port. She had a repertoire of three topics: ghost stories, the politicians and other celebrities she knew, and her paramour. Not that we heard of the latter, she just kept his name. Sponge cakes during the week and lamingtons on the weekend. Strawberries and turkey. The tide is out, someone has arranged tiny little fish in the round residual puddles. They’re bright silver with a bright black band down the side. The hooks are bent pins. We ‘catch’ the fish. They’re arranged then on big dinner plates. Our sister dearest recovered a giant baler shell. The snail was still inside. No one in the family wanted to take up the boating life. Not even my sailor uncle who gave up finger after finger to the cabinet-maker trade and then became a federal government officer in the diplomatic corps with a posting in Athens. What he did for language I have no idea for he never spoke

At Torquay that’s where she told her endless tedious ghost tales. The house was still there when I was last in that neck of the woods. A hop and a spit and you were on the beach. A large shark appeared in the murky breaking surf. Before that it was Lota. If you got up early you could float on the tide all the way to Wynnum and back again. When the tide was out we set to work with the yabby pump. Not that we ever got anything. My birthday treat was a trip on the Hayles ferry from North Quay. A terrible wind had sprung up by the time we reached Moreton Bay. As the cargo – mostly sawn timber – was washed overboard and the galley was flooded with the crew spewing their guts out, my grandmother thrilled with delight. I had good sea-legs but I didn’t screech; I inspected. By the time we reached Amity Point things had settled. I can’t say I wasn’t disappointed.

How she got her love of the sea I don’t know. After that decisive moment when she quit her landlubber life and became a solitary spirit, there she was with her boats and her sea planes - and the taxis she used to hunt real estate. And always two spits from the shoreline: Victoria Point, Cleveland Point, Thorneside, Redcliffe, Maroochydore, Noosa. You could never quite believe her. She claimed to be the first woman to have a commercial fishing license. Maybe so. She claimed to have donated various marine oddities to the Queensland Museum. Maybe so. She let my brother eat tomato sauce sandwiches – which was a good thing. There are photos of the 'Crescent' at TI; and more photos in Townsville with a huge catch of Spanish mackerel on the deck. I never found out if she could swim. She was brought up round horses, a Snowy River girl. These days she might be a jockey 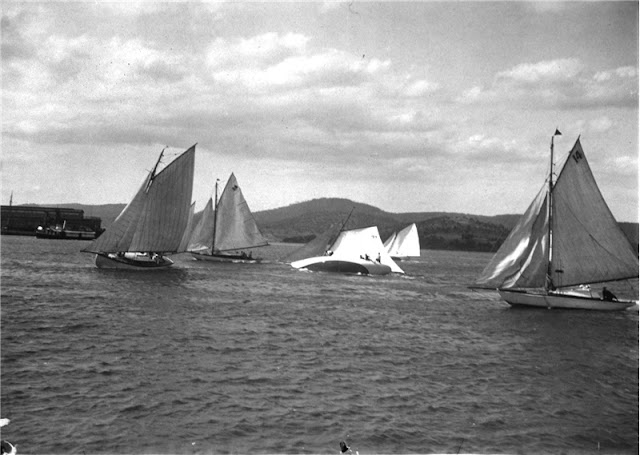 not really my story

Boats…my mother once jumped off a row boat to save a small child who had fallen off a pier while my elder sisters yelled for someone to “get mummy’s hat!” , which had floated off to sea (but this is not really my story because I wasn’t born yet)
AND I once sailed after midnight from Balmain pier to Darling Harbour with three intoxicated others in a row boat, which was probably a bad idea as I can’t swim (lucky I lived to tell you the tale!)