Tim Bass is moving a selection from his recent paintings. Sue Callanan is re-locating her cork bricks to reflect the form and orientation of the building. Margaret Roberts is re-arranging her Richard Artschwager blps to re-signal the world around us. 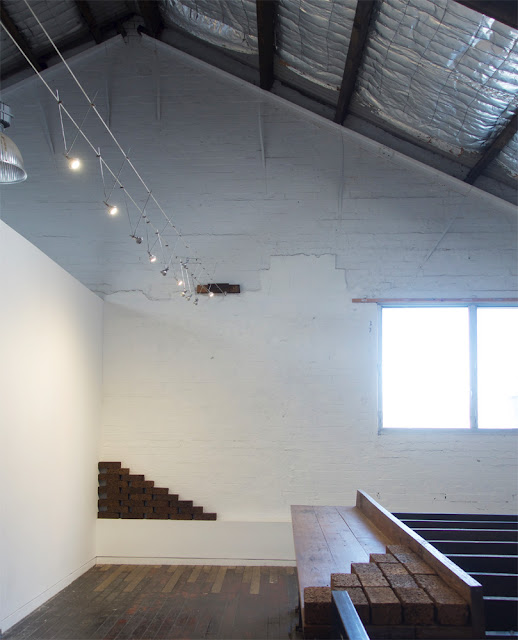 
I’ve used cork bricks to displace familiar readings of the present architectural form of the building. The ‘bricks’ align in a pattern that is mirrored on both vertical and horizontal planes, signalling the orientation of the building and referencing various ‘discrete’ architectural elements—the apex of the ceiling, the stepped brick corbels, open louvre windows. The unlikely material form of the ‘bricks’ is located in such a way as to also draw attention to the particular surface textures—existing bricks and timber and, by extrapolation, other architectural forma and materials within the building.


I have installed two blps as part of my regard for artists who make physical space a key subject of their work. Why did that suddenly become so popular among artists last century? Was it in the hope that people would mimic the work and start noticing the world around them as well? Did they think the abuse of the environment might stop if enough people started also valuing the physical places in which they lived? Did they dare to hope that enough people might start caring for the physical places in which we live to stop fossil fuel burning, coal mining and csg fracking, to close nuclear power stations before they leaked into the oceans, to stop using plastic, to prevent global warming, to plant trees everywhere, and so on?  Imagine the future we would be facing now if that had actually happened in the twentieth century?

Those twentieth century artists are not to blame for that failure any more than the many others who contribute to the world-wide environmental movement that keeps battling in the hope that the worst can be avoided.  Richard Artschwager was one of those many twentieth century artists. He made blps  (among other things) from the mid 1960s onwards: curator Jennifer Gross described a blp as something that ‘had no merits unto itself, but you would notice the context, the world around it, . . . it is a signal for you to see other things’ (1). While the name blp is unique to Artschwager, the shape itself is everywhere—look for it on footpaths, in your kitchen and pill packets, in building decorations left from ancient Rome, the Baroque and probably other periods. margaretroberts.org
(1) youtube.com/watch?v=ELIo2zY2AQw