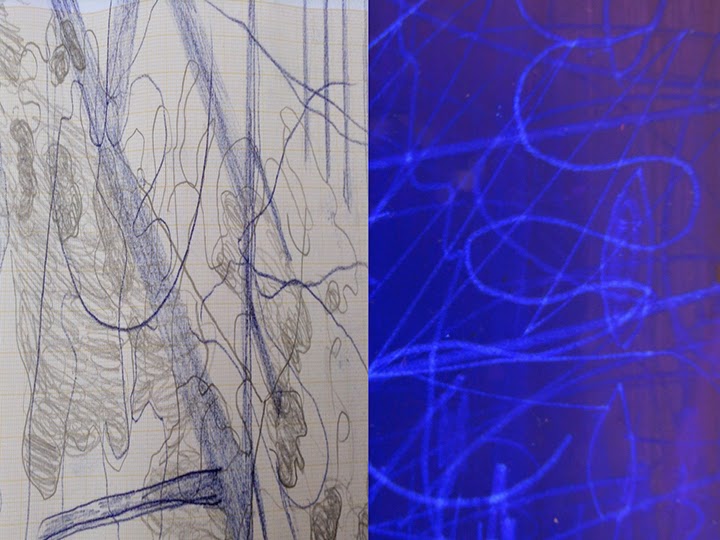 Sound Lines is a series of drawings made during a textile field trip in Gujurat, India (February 2014) and at a Land Art Project in Fall, Norway (July 2014). The chinagraph drawings and rubbings were made on a tour of textile factories, workshops and museums in Gujurat. They were made “on the run”, in buses, museums, artisan studios and ancient mosques, temples and traditional step wells. There are line drawings of colourful and intricate embroideries from Ahmedabad’s Calico Museum and others from the Rabari embroidery workshop at Kala Raksha; the rubbings were made at Gandhi ’s ashram, in markets and woodblock workshops. The drawings were made in Norway as research for a site specific work titled ‘Birch Bridge’. The materials for the work–birch wood, hemp, brooms and pans–were found in situ, except for  a woollen fleece bought from Tasmania (my birth place) specifically for the project. Carbon paper was used to copy each drawing and rubbing, the carbon copy becoming in turn the foundation for a new work. A number were made in response to sound works by composers in the project; other artists collaborated in drawing. Each collection of drawings was made in a particular location, over a three week period in the company of artists and designers. Gathered together, exhibited side by side, they are a diary of images, conversations, history, fast impressions…grounds for a deeper understanding of a new place and the complex layers of history that go to make up each site’s identity. Land Art Project Participants: Boyd, Alison Clouston, Caroline Ho-Bich-Tuyen Dang, Kaisu Koivist, Egil Martin Kurdol, Kjell Samkopf